There are a couple of ’special‘ flights I always wanted to take. You probably only understand why if you’re into (air) traveling like me.

One of the flights is British Airways Flight 1 from London City Airport (LCY) to New York John F. Kennedy Airport (JFK). Main reasons for selecting this flights are:

The planning for this trip started several month ago. I will probably blog about the planning process separately.

The current trip started today morning at 04:15 a.m. at the Novotel Hotel Munich Airport. Took the bus 635 at 04:56 en route to the Airport Terminal 2. After check in I stopped by the Lufthansa First Class Lounge for my traditional Bavarian Weisswurst breakfast. Driver picked me up at 06:10 to bring me to the remote position for my flight LH 2490 to LCY, leaving MUC at 06:30. Today operated by Augsburg Airways with the Dash 8-400 D-ADHR. Left MUC and reached LCY both on time. I was a bit concerned about this flight the days before because yesterday was one of the in the meantime many days with strikes from the union Verdi. Really annoying if you ask me but that’s how it is. Arrived in London two hours later at 07:40 a.m. Fortunately there was no queue at UK Immigration so I was ‚landside‘ just a couple of minutes after deboarding. That’s a big advantage in flying into LCY compared to London Heathrow (LHR). As BA 1 departs at 13:00, I did have enough time. Went straight to the British Airways check in counters to ask if I already can check in for my flight – which was not a problem. Got my boarding pass with a smile. Used the airport’s left luggage facilities to store my bags (GBP 5 per day and piece) and went into the city.

I was back at the airport at around noon. Security check was fast and I went straight to Gate 24, where BA 1 as well as BA 3 departs. BA 3 is the same flight just a couple of hours later. As LCY is a small airport, there’s not really a Lounge. But BA ‚transformed‘ the gate area into a small lounge serving some snacks and basic drinks. That’s perfect and enough. 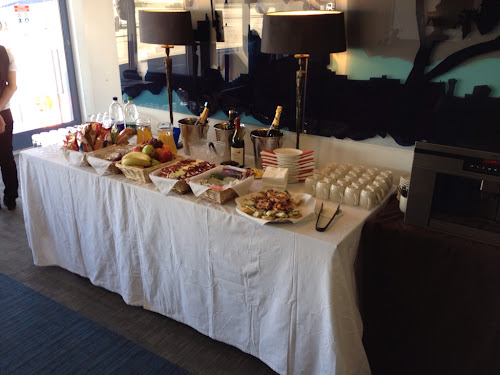 Boarding the aircraft G-EUNA (the plane’s registration) started at approx 12:30. As this flight is also called ‚banker shuttle‘ I was surprised to see just a few business-like dressed passengers. Boarding was completed at 12:40 and our take off was on time.

When I first entered the plane as the first of us passengers I was really surprised. Had seen a lot of pictures but seeing and feeling it live is a different story. Amazing. Selected seat 07K during the online check in yesterday as I like to sit always on the north side of a plane (so I usually can have the shades open to look out of the windows – without beeing dazzled by the sun). Today’s flight had only a few empty seats and luckily 07H – the seat next to me – remained empty. Good fortune for my first BA long-haul flight :-) Could start a rant about Lufthansa now…. 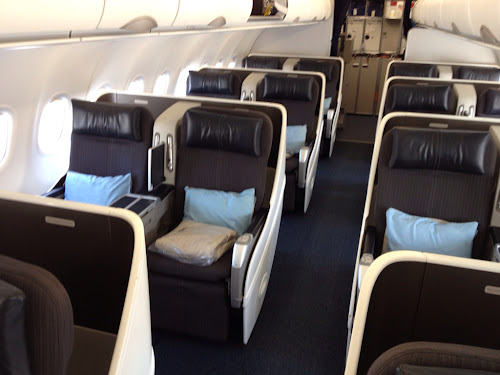 Shortly after take off we were served drinks and an appetizer. We could choose from:

One hour later at 14:07 we reached our Gate at Shannon Airport (SNN). We had to disembark and take all our belongings with us. First step at SNN was a security check, required by U.S. security regulations. Afterwards there are a couple of immigration desks (7 were staffed for us approx 25 pax). The CBP officer was friendly (well, did I already mention that I did not had any bad or negative situation during my 40+ U.S. immigrations?). Preclearance was done within minutes. Next step: waiting in the gate area (did forget to take a picture).

Boarding for the second leg started a couple of minutes later and was done quickly, of course. Take off was at approx 14:40. Again very shortly after take off we again were served drinks and a salad. 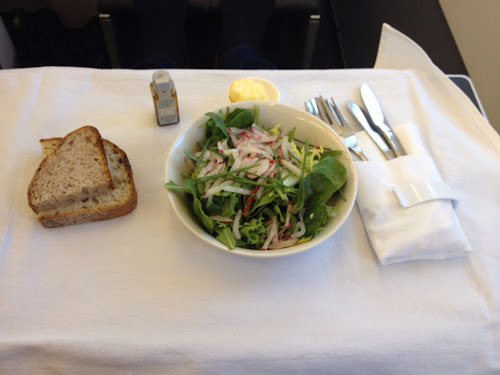 For the main course we had a choice of:

Had the filet of beef and the Rhubarb fool – both delicios! 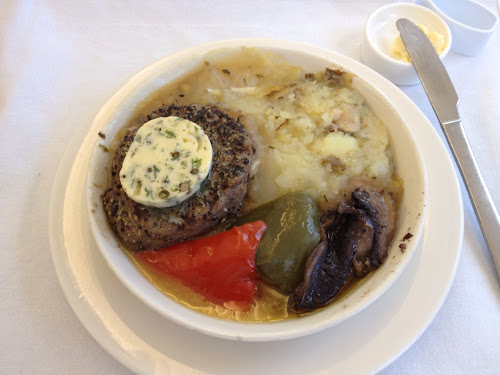 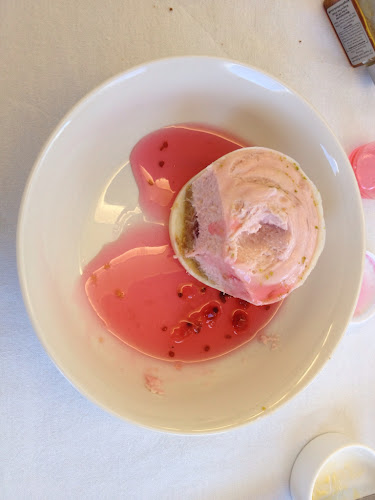 The Business Class seat is really very comfortable, even for me. Well, if I need to compare it with Lufthansa’s seats, I’d tent to more like the new First Class seat. I know, it’s my own taste. 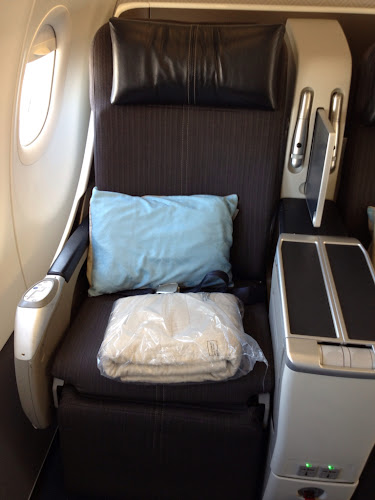 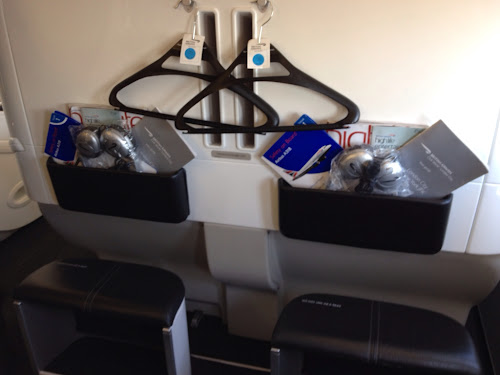 It can recline to fully flat bed. It also features 2 universal power outlets per seat! Regarding the bed….well, it is very comfortable and I managed to sleep for an hour. But it is only approx 1.80m, so I could not stretch my legs :-( 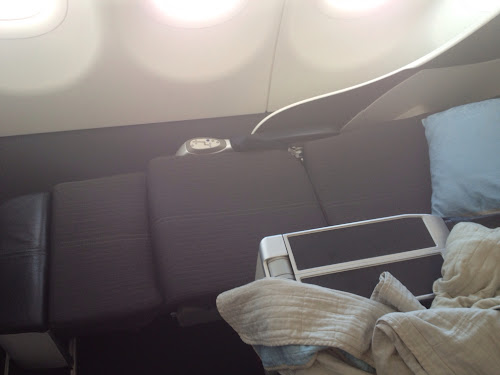 For inflight entertainment you can get an iPad (for the geeks: it’s an iPad 1) loaded with a bunch of movies, TV shows and games. I like this concept as it is way more flexible than the build-in systems. Like car GPS systems.

Apparently there is also the OnAir mobile phone system onboard which should allow text messages and data services – no voice (which is great!). Unfortunately neither my German Vodafone nor my T-Mobile UK or Truphone SIM card where able to connect. No clue why but I survived this short flight without beeing connected….

Approximately one hour before landing we got another drinks and sandwiches. 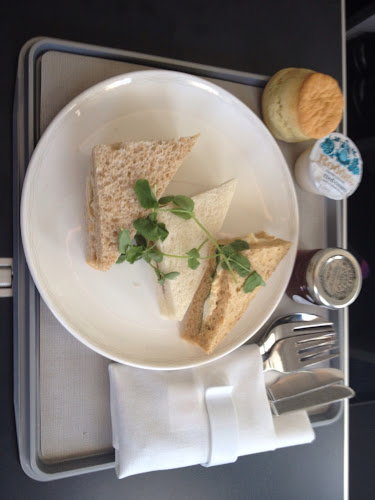 Arrived at JFK Terminal 7 ~40 minutes ahead of schedule. As it was a domestic flight I was just a couple of minutes later at AVIS to pick up my rental car.
Written on my iPad with a bluetooth keyboard using the App „Blogsy“ during the flight. If you find typos please keep them ;-) And bear in mind – I am not a native speaker. Hmmm – I could write an article about my travel technology :idea:
Regards,
Dieter
Dieser Beitrag wurde unter British Airways, Flight, Travel Report veröffentlicht. Setze ein Lesezeichen auf den Permalink.