Cape Air (IATA Code 9K) is a regional carrier with a main hub in Boston (BOS). They also serve destinations within the Caribbean and other routes within the continental U.S.

I have already flown 3 legs with them and blogged about it (in German). Cape Air operates Cessna 402C aircrafts with up to nine passengers. Sometimes you can occupy the Co-Pilot’s seat as typically there’s no second Pilot. Unfortunately I am too tall for that seat.

For today I had choosen to fly 4 legs (as mentioned in other posts, I am still trying to write about the story of the whole trip). I stayed 2 nights in Saranac Lake, NY in the Adirondacks. I like this area because it is so scenic. I already did 2 scenic flights in the past, one out of Lake Placid (LKP, host of the Winter Olympics 1932 & 1980) and one with a sea plane out of Long Lake. Saranac Lake has it’s own Airport: SLK – Adirondack Regional Airport. Cape Air has 3 daily flights to Boson from SLK. So I decided to fly SLK-BOS-SLK. Weather permitting, this could be a really scenic flight! I also added on a separate ticket BOS-AUG-BOS on the same day. AUG is Augusta, ME. Also a nice scenic route along the coast.

SLK-BOS departs at 06:30 in the morning. Set my alarm to 5 a.m. and was about 6 a.m. at the terminal. Well, it’s a tiny building with just 1 check in counter, a TSA security control station and a waiting area. There’s even a Hertz rental car counter (which was not staffed at this time). Check in was friendly but in my case took a while as there was a computer issue while trying to enter my birthday into the system. Booked that ticket through a German flight booking site and they did not ask for the Secure Flight data. Well, that was the main reason why our flight was delayed by about 15 minutes. 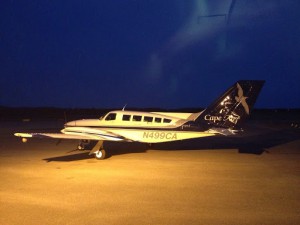 Unfortunately it was very cloudy on the whole trip to Boston so no scenic view. Well, could have been worse. In Boston I went straight to the ladies at the Cape Air Gate C27 – there’s only one gate and one counter for all 9K flights at Boston airport. Ask them to check me in for my flight to Augusta and back. They couldn’t really believe that I was just flying for the purpose of flying and sight seeing :-) We had some fun talking about it. Thank you! 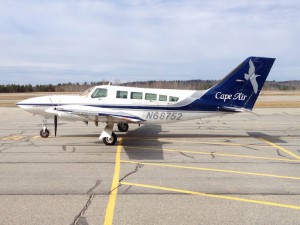 During the flight to AUG weather cleared a bit and also on the way back it was a really nice view. The most funny part however was, that I was the only passenger on the flight BOS-AUG! That was kind of a private flight. Enjoyed it. Had approx 20 minutes turnaround time at AUG and the gate agent already welcomed me very friendly and laughing while handing me my boarding pass for the return flight. I stayed in the waiting room for some minutes and we were 5 passengers on the return flight.

After arrival in Boston I went again to the same ladies at the gate counter to say hi and ask for my boarding pass back to Saranac Lake. Was allowed to take an earlier flight. Again, thank you, Cape Air.

Arrived back in SLK on time with a stunning view during the flight. It was worth the trip as the Adirondacks are that beautiful! 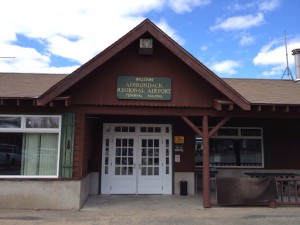 As metioned, it was a fun trip and I enjoyed it.