A weekend trip with British Airways to Seoul (ICN)

Starting December 2nd 2012, British Airways introduced a service from London Heathrow to Seoul Incheon Airport in South Korea with a Boeing 777. To celebrate this, BA offered some reasonable fares in World Traveler Plus and Club World for a limited time. I took advantage of this offer and booked via my favorite travel agency a return trip in Club World. Seoul is always worth a trip. Some 25 fellow Flyertalker were also on board my flight date. Approximately 80 FTer flew this route during the promo time. Some even made it on the inauguration flight.

I was to leave Munich on a Friday morning and returning Sunday late evening. So I had just one night in Seoul. Have been four times so far in Seoul this year, making ICN one of my most used Asian region airport. Which hotel should I choose this time? Again the Hilton Millennium where we had an awesome stay earlier in January? It happened that a new Hilton Family hotel opened in mid November: the Conrad Seoul. As I am a big fan of the Conrad brand it took just a few seconds to decide where to stay. Conrad it is. So I booked one night using Points and Cash. I was really looking forward to this trip. So was Conrad Bear, my travel companion :-) He hoped to get a new playfellow at this Conrad hotel.

Friday morning, 05:00 a.m. My alarm clock told me to get up. One hour later I took a cab to the airport as my flight to London departed at 07:45. Unfortunately, that’s one of my most used flights ever. BA 947 MUC-LHR.

As always Check-in at the BA counter in Terminal 1B was fast and easy. So was the passport and security control. I headed into the British Airways Galleries Lounge for a very short breakfast, The variety of food items is very limited however I appreciate that there is a lounge at all!

The flight was on time and service was lovely as always, even in Economy this time. At London Heathrow Terminal 5 I had as always go through an additional security inspection. Still no clue why BAA built this Terminal in that way, that everyone from a connecting flight has to go again through security. Mad if you bought liquids in the departure area of your originating airport….

After a second breakfast in the BA First Galleries Lounge I went to the departure gate. Boarding started and I made myself comfortable in my seat. 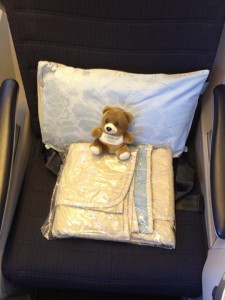 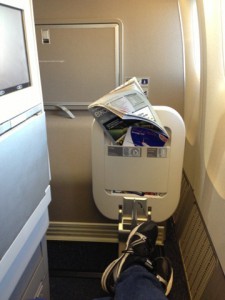 I did not eat anything during the short flight to ICN so I cannot comment on the service or food. I spent the time on board reading a thrilling book (in German): “Der Buddha, Geoff und ich”.

Unfortunately I was not really in a good mood that weekend so I did not join the group of Flyertalker.

Immigration after our on time arrival was fast as always and just a few minutes later I sat in the commuter train to Seoul Station and to the Conrad hotel (see next blog post).

Sunday flight back home was without any issues. Well, at check-in I was asked if I am willing to either upgrade into First class using Avios or accept a downgrade into World Traveler (=Economy) for a compensation of GBP200. Not a good deal so I politely denied.

It was a nice weekend escape! Thank you BA for the nice fare.